It was a challenging night at our first session in the Kotara Bowling Club: firstly we didn’t know where to set up, and then we found our spot right next to about 20 kid and 20 adult diners. The roar of the audience wasn’t always easy to play along to but we managed and in fact I think we were a big hit with the patrons, who sang along with us and clapped. However next week Jane is going to try and get the private room downstairs for us so we don’t have to compete with the noise of the patrons so….. stay tuned!

Regardless of the noise of the rather appreciative audience we had a good night singing some favourites including “I Can See Clearly Now”, “Under the Milky Way”, “Catch My Disease”, “My Island Home” and even “Into My Arms”. The new club has a really good atmosphere and I think it will really work out for us an a new venue. We have had ANOTHER very nice and new singer join us (Kate M) and Cath K brought down the house with her fabulous singing although her boys did give her a bit too much constructive criticism. But we love the Kelly clan and Matt also got up on mic and was very impressive!

And as a reminder next week will start at 6.30pm as Danielle will be taking the class and needs to race over from teaching at Jack’s Music. So for all West Newkestra classes from now on lets start at 6.30pm. Danielle leading this group for the next 3 weeks till Jane gets back from ukeing around Hawaii, Canada and USA.

It was our last night at the Waterboard and we gave the place a good farewell sing (including a roaring rendition of Isa Lei). Next week (11 July) we will be moving to the Kotara Bowling Club (Howell st Kotara).

For our final night we had some great moments, including a really sweet version of “I Can See Clearly Now” with 3 part harmonies, led by Barbara and Anne on mic. We practised “Dont Sing Aloha When I Go” for when we play it with AJ Leonard at his concert (next Friday 12th July). Belinda did a ripping version of “Busy Line” on mic and John Waring sang really smoothly on “Under the Milky Way Tonight”. He will be performing this in Hawaii so good on you John, you nailed it! 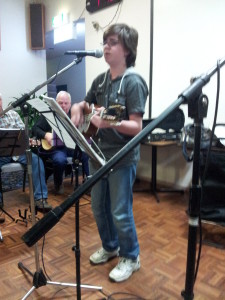 Jane couldn’t stop smiling all night because she had just received her marks for her performance recordings from James Hill (comments deleted – Ed.)

Finally we had young John get up and show off his lovely new 8 string Lanikai (birthday pressie) and he led us in “River of Dreams” and as well “Banana Pancakes” (with some help from Matt). Very very cool!

Even though Jane leaves us (for Hawaii, Canada and USA) in mid July for 3/4 weeks, this ukestra will continue to play at Kotara Bowling Club on Thursday nights from 6.15-8.15pm. Yippeee for the new venue and thanks to the Waterboard for hosting us for the last 2.5 years.

A large turnout tonight with 26(?) uke players – an impressive number given the rainy weather and the muddy carpark. The backing instruments included bass, drum and a welcome harmonica return for Four Strong Winds. For River of Dreams (Billie Joel), we spent some time practising the strumming pattern, before doing the song twice. Towards the end, Jane introduced, Busy Line, which the group played first up with hardly any issues, reflecting the maturing of the group.

Had a newbie from out of the blue – Kate (welcome Kate!). Some singing was done in pairs – Barb and Cynthia, Judy(?) and ???, John A and ??? (sorry about the names).  We like this at it means more people can have a go in a safe manner. Our soloists were John W, Robert, Grahame, and in a first, Belinda did really well on Busy Line (which should be expected! She has done it at LakeMacUkestra a few times now – ed).

Don’t forget – we are looking for a new venue very soon! Keep your eye out. One more week to go (we think).