The Railway Sheds at the Foreshore Park 3.30-5pm

Be part of the Ukestral Voices Choir!

Jane Jelbart directs this community choir (with a little difference), teaching songs from around the world, as well as gospel, contemporary music and folk. We have performed at numerous festivals, including the National Folk Festival in 2014, 2015, 2018 and 2019.

We offer two opportunities to be a part of Ukestral Voices;  Friday afternoons – which has been going since 2012 and Wednesday evenings – which started March 2017. Both choirs are open to new singers.

There is an emphasis on harmonising, learning vocal parts, improvising and even a bit of percussion.  Jane is keen to get the best from your voice and improve your vocal technique, however she is also keen on having fun and making sure everyone enjoys themselves

$160 prepaid for ten classes taken any time over the year

The One Song Sing

Note: The One Song Sing is not currently running however with the latest NSW Health announcement allowing singing indoors we shall try to start it up again once some of us have the vaccine. WATCH THIS SPACE. But if you’re still in need of a singing fix, feel free to try Ukestral Voices (Read above)

Scared to sing? Come dip your toe in the non-committal water with 150+ non-singers (and many really damn fine singers!).

Check it all out here.

Who is Jane Jelbart? 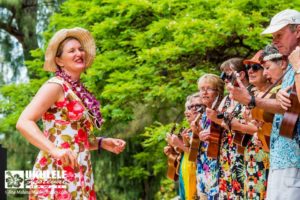 Jane has been singing and arranging a’capela music for nearly 20 years and is the main arranger and leader for One Song Sing. She and Mark have toured as teachers and musicians to North America for years. She regularly teaches 3 ukestras each week, and is the Conductor Extraordinaire of the Ukastle Ukestra at some of their large performances. Jane has previously played Brazilian and African percussion so she likes to incorporate these elements into the choir. Jane also performs with Mark Jackson in their duo, sometimes trio or quatro Jack n Jel.