Book or Join the UUU 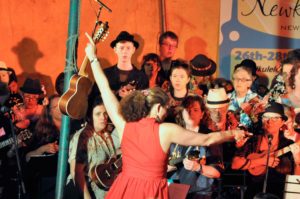 Newcastle and the Lower Hunter is arguably the richest ukulele culture in Australia. Per head of population we reckon we have more ukulele players engaged in community music-making than anywhere else in the nation.

Each week The Sum of the Parts (music) facilitates 10+ ukulele gatherings. Some focus on singalongs, some focus on arranging, some on developing specific skills – strumming, picking, reading or singing, to name just a few.

Add to this the people who, having learned some skills from us, have now gone out on their own to make music at nursing homes and local festivals.

We thought that it was about time that we formalised our public performance group, and develop something that would bring people from the far flung corners of the Lower Hunter – from Cessnock, Paterson, Port Stephens, Lake Macquarie and Newcastle.

The progenitor of the UUU – the Ukastle Ukestra – took out the Golden Ukulele at Australia’s premiere ukulele festival – the Melbourne Ukulele Festival – in 2011.

Afterwards, the Director of the festival, Mr Dean Denham, was caught on film, expletives flying, saying that the Ukastle Ukestra had changed the ukulele landscape in the country. Go to about the 3:15 mark in this film clip to see what he had to say about us.

At that festival we employed ukestrated songs, with great singing and harmonies, to introduce a new style of community ukulele group. Contemporary songs such as My Island Home and Catch My Disease captured a new ukulele zeitgeist, whilst traditional songs, such as Porekarekare Ana capture the heart.. See for yourself in this version of Catch My Disease (featuring Danielle Scott on lead vocals) at the 2011 Melbourne Ukulele Festival.

This impromptu performance in a corridor outside the Queensland Museum (just prior to the Brisbane Ukulele Festival in 2011) shows that the uke can evocatively perform contemporary country standards as well.

The number of members of the UUU at any one performance varies, depending upon location, reputation, location, and whether members want to take a holiday there or not. You can only ask …

To become a peripheral or central member of the UUU, or to book the UUU for your festival or other event, please go to our contact form.

Aspiring and current members might be able to glean some rehearsal snippets from our occasional blog.

Our choir is also starting on Sundays outdoors