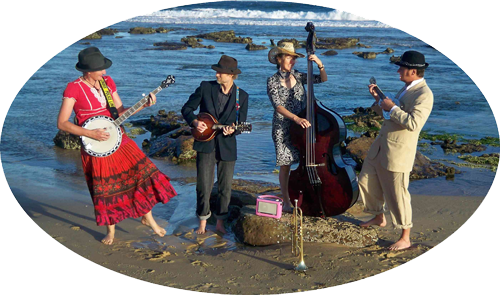 ‘From the first rehearsal we all felt a special banjo / mandolin / guitar / double bass rhythm magic. But I suppose it is the magic that anyone playing something resembling bluegrass feels…’

‘I never for the life of me imagined that I would be playing a Prince song, let alone Foo Fighters … ‘

This video of the Jessie J. pop song from 2011 provides an answer better than a spiel. Watch….

You can buy our debut CD – Barefoot Blurgrass at our gigs.

The Do Riders also play their own songs. Mark Jackson writes tuneful yet obtuse (and occasionally award winning) tales: the perils of a Banjo Hell; a scientifically correct allegory of falling in love with a domestically challenged marine biologist; or musing on the environmental wisdom of being a shoeless Legge.

And then they do their unseemly collection of contemporary rock and pop, mixed with tunes and songs that are more seemly for the traditional acoustic instruments they play – double bass, mandolin, guitar, ukulele, banjo, plus the occasional melodica, accordion and trumpet.

The Do Riders are a NSW mid-north coast based band who are like the endearing relatives who live up the coast somewhere. You know them. The slightly eccentric aunts & uncles who play double bass, mandolin, banjo, ukulele and guitar, and who (embarrassingly) try to play ‘hip’ tunes.

These aren’t the monotonous toothless ‘lations, but the ones who have a certain joie de vivre that comes from living much of their lives without the pressures of a big city career. They like stuff that grooves, that you can dance to, is entertaining, accessible and doesn’t require drums. They are also known for developing a close relationship with their audience.

Some people say they are funny…pffft…. as if. They’re musicians, not comedians. They just like to enjoy the company of those with whom they like to play music and the audiences who enjoy seeing and listening to something just a little bit genuinely odd.

If you have been to any of the following LGAs (Canterbury, Cumberland, Mount Druitt, Northern Beaches, and Rooty Hill) then go to the NSW Health website and see if you have visited the affected venues and locations. Chances are that you haven’t but it is best to check.