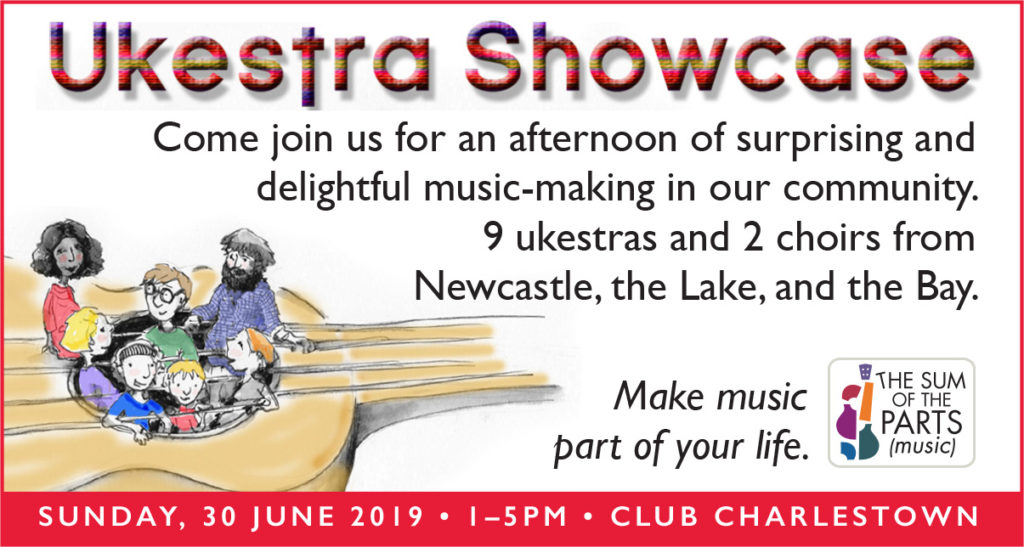 In even years Newcastle hosts a nationally renowned ukulele festival – the Newkulele Festival.

In odd years we showcase the talents of the members of the local music-making community that coalesces around The Sum of the Parts (music). Unfortunately we missed the opportunity in 2017, but in 2019 we got to show off ALL of the talents of our 11 weekly groups. Please enjoy these 10-15 minute performances of each of our 9 ukestras and 2 choirs.

The Hunter’s ukestras each have their own flavour and supportive community, from ones that have been going for nearly ten years, to our most recent, started only months ago. Similarly they contain people of varying abilities, ages and experience. Oft-times the least experienced are the most supportive and entertaining. Each ukestra and choir helps people to find their musical voice, with some wonderful surprises.

Thanks to Peter King for videoing the day, Tom Dowding who played drums for most groups, to all the people who helped make it a rambunctious success.

We started the Showcase with the least confident group, full of newbies. So many newbies in fact, that most decided to stay home (and who wouldn’t when you live in beautiful Port Stephens)! Four people from this very new group were assisted by more experienced Tomaree Ukestrans, and some other interlopers, doing songs selected from our classic beginners repertoire – Blue Bayou (featuring Donna Abraham in her lead singing debut), Purcell’s Canon, and Runaround Sue (a favourite all-in sing).

Sunday is our newest ukestra – 10:30-12:30 every Sunday. It is also the first ukestra that John Wallace leads and teaches. Starting in May 2019 (whilst John was still 17!), this ukestra is comprised of a few older hands, but has quite a few newbies as well.

Again, beginners repertoire was selected, with a another public singing debut by Heather McKay on Sloop John B

The Fleetwood Mac song Rhiannon is sung by first time public singer, Ruth Holl who swears it’ll be her last public singing outing, but we’ll see about that!

For seven years people have been gathering under Jane’s tutelage to bring alive their singing voices. Here they join together to sing Shallow (Lady Gaga),  Never Tear Us Apart (by INXS), In This Heart (Sinéad O’Connor) and Nyurruwiyi a Warlpiri song taught to us by Australian singer/songwriter Mal Webb. Unfortunately an error means that there is no copy of Never Tear Us Apart. (If you know someone who has it, let us know!)

Tuesday nights started way back in November 2009. It was the original and has certainly seen some changes over the years. It still has many good players, great singers, and a culture of “let’s give it a go”, but the originals now seem to be stepping back, making way for new blood, generally people who are inspired and challenged by the “Tuesday night aura of ‘gee they’re good'”. A tad under-staffed for this performance, we nevertheless tackled the chordier/riffier stuff.

Newer ukestran, Kris Fegent, held her own with a debut singing performance on James Bay’s Hold Back the River.

One of our more recent discoveries is an ukulele version of Sonny Moon for Two by saxophonist Sonny Rollins. Peter Scott and Chris Robinson take a uke solo each, followed by a drum/bass combo jazzy solo thing by Tom Dowding and John Wallace.

Finally Jack Broekman (from The Clyde Street Band) performs a swoonie version of Burt Bacharach’s This Guy’s in Love with You with Susan Gleeson joining on harmony.

After interval and just before the Saturday Newkestra, Mark waved his arms around a lot to ostensibly lead everyone in playing the Michael Jackson classic. Kate Lofting (of The Recording Studio fame) took lead vocal honours for this one.

Saturday’s are a big day for these ukestrans, with between 40-60 people showing up each week. The Saturday performance starts with Blue Yodel. Can you tell Cassia Lindsay has sung professionally? Perhaps even recorded obscure Romanian contributions to Eurovision? A superb rendition, as usual. Although she perhaps needs a better milliner.

Caroline Traill’s sublime voice received formal training in her farm kitchen and shower for many years. Thank goodness she has found the joys of a microphone and singing with others! Burn Your Name is a Powderfinger song which was ukestrated by Newcastle school teacher Ruth McCrae. It is wonderful and intricate, and sounds so good on a bunch of ukes.

Sam Ashby makes her debut public performance leading the 1960s classic Where Do You Go To My Lovely – want to know more about Sam – go here! It needed a good English accent, and Sam doesn’t disappoint! Trish Adams does the lead ukulele twiddly bits.

What can one say about Ken Hullick’s public debut? Maybe we can say we are All Shook Up. He has an OBE so he has nothing to lose.  Oh to be as sprightly, confident and quirky at 81. Ken – you are a model of growing old disgracefully, and a mentor for many of us.

Tomaree Ukestra have found musical shelter with each other up on the Blue Water Wonderland Peninsula. They are good friends who enjoy performing in their local community for service clubs and nursing homes.

Mondays with Jane has been happening for 6-7 years, with a steady and solid community of friends, singers and ukers. They performed Ukestra standards from the last 4 years including Under the Milky Way (lead sung by Jenny Bailey and Trish Collins), Vance Joy’s Fire and Flood sung by Virginia Slatter, Geoff Noblet and Judi McLean, Leonard Cohen’s classic Dance Me to the End of Love (Penny Creighton and Lyn Lewis), and a finale of a gospel, fire breathing hell-soaked performance of Tom Waits’ Way Down in the Hole sung by the Right Wrong Reverend McCaskie.

Tuesday afternoons with Mark at Teralba has experience a recent resurgence. New singers, keen community members, but still people who tend to enjoy the older, more tried and true songs, country, jazz and older pop.  Seasoned performer Jacqui Stephenson leads off the Lakemac set with Don Gibson’s Sea of Heartbreak. My Old Friend the Blues, a beautiful song by Steve Earle is given a reworking and new verse by Lloyd Batten. Our oldest confessed Ukestran, Marjorie Maxwell lead us in Waylon Jennings Dreaming my dreams. Professional crooner Shirley Linsdell and a bunch of fine instrumentalists delivered a great version of Fly Me to the Moon.

The Wednesday night choir selected a diverse array of material to perform, from Joe Gaia’s indigenous anthem Yil Lull, through 20s pop (Tonight you Belong to Me), 70s rock (Fleetwood Mac’s Don’t Stop), to a musical version of a Michael Leunig poem and an African gospel song. Such uplifting stuff.

Thursday nights is our youngest demographic (someone was in their 20s until they turned 30 recently, and you’ll see 10 year old Hypatia there too). It is also our noisiest and most raucous. That could be because of the rambunctious ukestrans, Mark’s behaviour, or the noisy restaurant downstairs. No-one’s to blame, that’s just the way it is.

Chris Middleton leads the vocals on One Day with Lisa Moore leading the mashed in quintessential 60s protest song I think we’re alone now. We’re not sure if Matisyahu would approve of his peace anthem also being mashed with Take On Me. But we did it anyhow.

We’re not sure what Barry Hill does for a living. Perhaps he flips burgers with Elvis as a job? Or is he a retired Engineering Professor? Choose your own truth, and swoon at this performance of Glen Campbell’s Wichita Lineman.

To finish off the whole afternoon the Thursday night crew joyously sang Emmy Lou by First Aid Kit. Jane Shields is the lead singer. Oh Jane – are you married? Because your debut as a public singer just seduced us all with your confident and radiant performance. Potential suitors may make application at …. actually…no…she is already married. 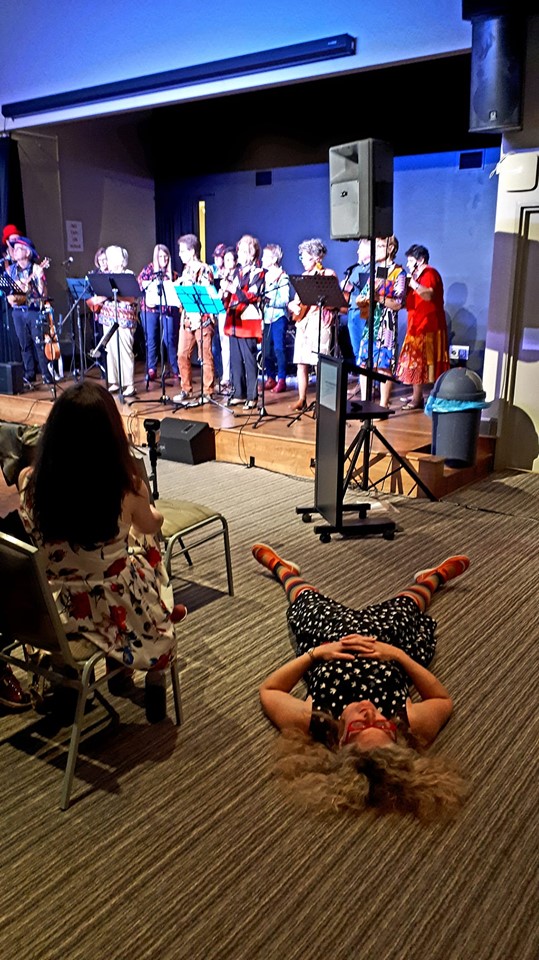 Thank goodness that’s over and see you at Newkulele in 2020! Or the next showcase in 2021 (did I really just say that? Does that year actually exist?).

Have a well earned rest Jane.

Our Ukestras and Choirs are running at the moment.

You don’t need to be fully vaccinated for our ukestras but you must be for the choirs.

If you wish to wear a mask and be cautious with social distancing that is wise.