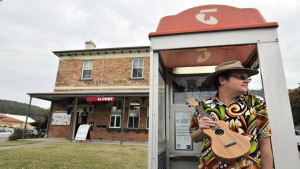 The Maitland Ukestra started in mid 2010 at the Grand Junction Hotel (next to Maitland Railway Station). We were there for about two years, and then we went to Paterson for five years. But now we are back where we started, at the Junkyard (as the Grand Junction is affectionately called).

These Pluckers (as we were known) are really a talented bunch, evidence of which is in this SoundCloud audio link to their full performance on the main stage at the Newkulele Festival. But don’t let this apparent talent put you off from getting involved. We really are a welcoming bunch too.

If you have never played ukulele before, then Mark will give a beginners lesson ($35 for half an hour for one person, $30 each for two people). Beginners lessons run from 5:45-6:15pm each Monday at the Junkyard, but you need to contact us first.

Chris Robinson has now got quite a catalogue of our performances on his youtube page. Meanwhile, here are some judiciously picked examples.