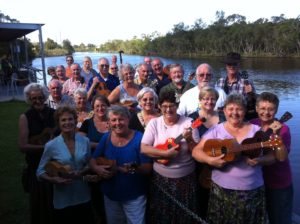 After we started the Ukastle Ukestra in November 2009, we realised how much the uke was appealing to ‘retirees’, and a lot of people seemed to be from the west of Lake Macquarie. We thought a daytime Ukestra could work, and it has!

The LakeMacUkestra participants have a taste that favours the older sorta songs – Tin Pan Alley and the like. 20s, 30s, 40s, 50s, 60s, and we squeeze in some from a bit later than that too.  Mark does try to introduce more technically challenging stuff along the way but will sometimes get told where to go.

Congenial, welcoming, innuendo – what you’d expect from a bunch of (mostly) 55/60 plus age group, none of whom one would call a shrinking violet (though shrinking violets are indeed welcome)!

And if you think it is all three chord wonders like You Are My Sunshine, then you’d be mistaken. Try Ain’t Misbehavin’, or Busy Line for the more challenging variety.

We also get a lot of people from down Morisset-way who make the trek up to the northern end of the Lake.

Boats even pull up for a beer! And the sun streams in at the end of the day in winter. This shot from June 2013 shows a roll up of 20+. 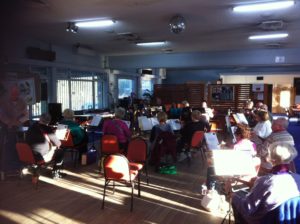 And if you want to pull your boat up (or drive your  car), here is a map of where it is at!)